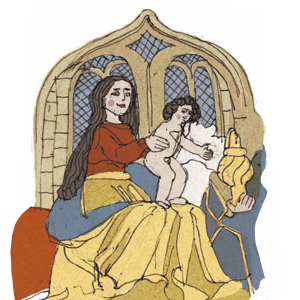 On an altar in the Mining Museum the Infant Jesus reaches out to the presents of the three Magi from the Orient. Besides gold and myrrh they also brought him frankincense.
Trees of the genus Boswellia produce the golden yellow grains of resin. The trees grow around the Horn of Africa, in Oman, Yemen and in India. Harvesting frankincense has been an activity of nomads for thousands of years. The stem and branches are scored several times. The white, sticky juice that leaks from the bark hardens in the sun and turns into solid resin. It is removed with a scraper shaped like a scoop.
Frankincense was used for many purposes already in the times of Ancient Egypt: not only in cultic practices but also for mumification and as an aromatic, disinfectant and anti-inflammatory daily incense. In antiquity the resin was a much desired commodity, it was worth its weight in gold and was traded along the so-called “Frankincense Road” to the entire known world. The sources of the resin were kept secret, all trade routes were continuously monitored.